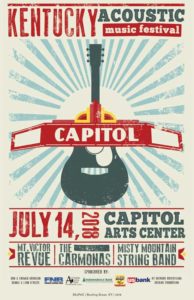 The 3rd Annual Kentucky Acoustic Music Festival is scheduled for July 14, 2018 at the Capitol Arts Center in Bowling Green. The Festival will be an opportunity for music fans to support efforts to “keep the Capitol vital” and hear some great acoustic music. While recent efforts by the City of Bowling Green to revitalize the downtown area have focused on improvements to the Square, developing living and new retail space, continued efforts need to also be placed on preserving the this important and historic downtown structure. Julie Milam, general sales manager with WNKY, sees the Capitol Arts Center as “the heart and soul of our downtown” and describes it as a “vital artery of the arts and entertainment” in Bowling Green. Ms. Milam reminded us that recent revitalization efforts need not forget the “re” (as in redevelopment) and should include a focus and funding for efforts to help restore and renovate the Capitol Arts Center and preserve it as an important and historic downtown Bowling Green site. Listed in the National Register as a contributing site in the Downtown Bowling Green Commercial District the Capitol is now owned by Warren County, and leased to SKyPAC to manage and oversee. A SKyPAC committee has been meeting to create plans for renovation, programming and fundraising. When asked what would help these efforts, SKyPAC’s maintenance manager, Gerald White, responded “pack the place every night”. Indeed, programs like Lost River Sessions have been using the Capitol as a site for their concert series, Capitol Movie Nights have provided movie goers a chance to see film classics and the Southern Circuit has given locals a chance to catch some pretty impressive independent films. Help us find ways to ensure the Capitol Arts Center continues to be a part of our history and central to the downtown Bowling Green culture by attending this year’s Kentucky Acoustic Music Festival.

Tickets available at the SKyPAC Ticket office or by calling 270-904-1880 or online at https://www.theskypac.com/shows/.